New series. I planned to open it with one of those classics from my portfolio – the Sahara shot – but then today this happened and I thought why not, since it’s so fresh in my memory – I took it literally 3h ago.

So today was Monday and I didn’t have any plans at all except that I had to pick up a check in Greenpoint. I hadn’t done street photography in a longer while so I planned today to be the day to get back to business. I haven’t shot any street at all in October and very little over the summer. Since I had to be in Greenpoint at some point this afternoon, I decided to just walk over there with a camera in hand. I live in Prospect Park South, so that took 3h. I was really excited this morning, today’s gonna yield heaps of new stuff, those good b&w images waiting out there in Brooklyn. Then I went out and 15km later I had 4 shots. Four. In total. Clearly, that wasn’t my day. That happens after a longer while of not shooting street, it’s like the street gets cold and then you have to warm it up again, rub it the right way, but it resists as though it was upset about you not being there lately or something. Like she’s a lover that you abandoned. Anyway, it looked like I’d walked those 17km for nothing, apart from the fact that it was hell of a walk in the sun. And what diversity! From busy Church Av, through the African food stalls with French signs here and there, black hoods of deep Brooklyn with infamous Bedstuy, Hasidic Jews in Williamsburg and then the hipster part where life is good to finally reach Polish Greenpoint. All that in 3h. That is perhaps why even though I haven’t moved one bit from New York for a year now, I still feel like I’m traveling all the time.

So yeah, the day looked like a fail photography wise despite the sightseeing. And then this picture happened right when I was gonna go down to subway. Typical. You either get a good shot right away the first 10min or the very last 10min. And it happens with portraits too! It’s funny how it goes, I have plenty of stories like that. So here I am walking to subway because I wasn’t gonna walk back another 17km and I see the street and the light, I see those insects flying in the orange sunset. Magic in progress. “Please hold on while we’re trying to connect you”. So the scene was there set up for me, nothing to do but wait for a protagonist of that short story. It didn’t take long. First, a guy crossed the street but he was too far. Then another one saw me turn right from Manhattan Av, looked that way, saw what I saw, and followed my lead taking out his camera. I telepathically told him to now cross the street. He obeyed but did it too fast and too close to me. Impatient bastard. I had literally a second or two to give it a shot. And this is what I got. It’s okay but those flares annoy me, I used to like them, but now they’re a nuisance. Then he took his photo and I noted that too. Digitally. 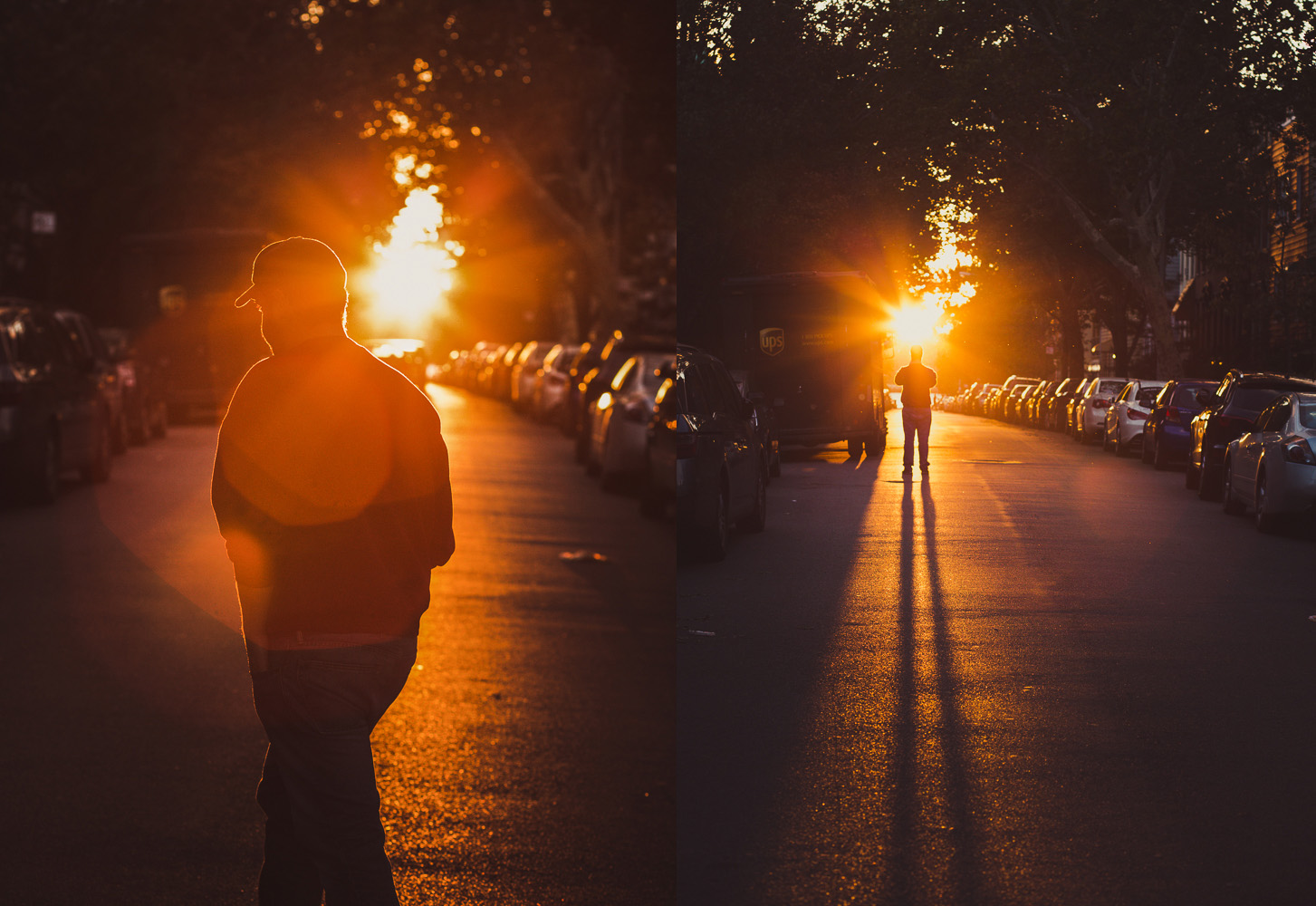 And then a cyclist rode by and I took a couple of shots but he kept to the side of the street (as you do unless you’re a little rebel). So when another cyclist appeared I told him as he rode by me to ride in the center of the street. He got it! Then he looked back to see if that was what I wanted.

But a second earlier I missed a better frame. As the cyclist looked back to see my reaction I raised my left hand with a thumb up to let him know he did a swell job and he did the same. So for a second or two I saw a silhouette of a dude on a single speed bike riding into the sunset with his hand raised as if he was some kind of a hero or as if he had just crossed the finish line after an alley cat. I believe he was smiling too. T-h-a-t was the golden shot I didn’t get because I hesitated for a split second deciding to enjoy that moment. It all happened too fast anyway.  By the time I lifted my right camera-hand he lowered his but kept looking back at me for another second and that’s how I got this shot.